Living with JSpA: How to Be a Good Sport

Andrew Roe is a junior in high school who loves being with his friends, his girlfriend, and driving around in his truck. Andrew is also an elite athlete—wide receiver on the football team and midfielder in lacrosse. He travels all over the country to play on competitive regional lacrosse teams and dreams of playing in college one day.

The months leading up to Andrew’s AS diagnosis last year were agonizing. His pain became unbearable, and he’d have to sit out of practice or games. None of us (especially Andrew) could understand why he could perform so well one day at football or lacrosse, and have to sit out the next. He had coaches question his dedication and character.

Andrew was finally diagnosed with ankylosing spondylitis (AS) in June 2021. With the help of his amazing rheumatologist at Phoenix Children’s Hospital, Dr. Goswami, we developed a treatment plan that seems to be working. Andrew is back to playing sports six days a week, planning for prom, and studying for tests. He has developed an interest in advocacy with SAA, and has resumed college visits and dreaming about his future. 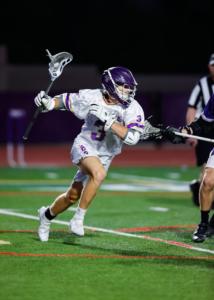 Spondylitis Plus: How and why did you get involved in raising awareness of AS?

I volunteered at a local health fair last summer, handing out SAA brochures and magazines and answering questions. It meant a lot to be able to share my personal experiences with people and inform them about AS. I know how hard it can be both mentally and physically to overcome. I met someone else with the same diagnosis there for the first time. It was nice for both of us to know that we are not alone.

Spondylitis Plus: What would you say has been your lowest point with AS? Your highest point?

My lowest point with AS was when I was undiagnosed. I had gone to all sorts of doctors to treat what we thought were sports injuries, but nothing helped. It was frustrating and hard to understand why I had so much pain when there wasn’t anything visibly wrong with my body. The pain was so severe it would wake me up at night. My highest point was my first lacrosse game since starting treatment. I was finally able to play for the entire game. My running was fluid. I was so relieved to feel like an athlete again. One of my friends’ parents came up to me after the game and said I looked like a different person out there on the field.

Spondylitis Plus: Have you modified the way you play sports or train because of AS?

I’ve learned some strategies for modifying how I play and train. Some of my medications made me feel nauseas so I took them at night after practice and sometimes adjusted the schedule by a day or two if I had a game. I have to think about how I’ll transport my medications that need refrigeration when I’m traveling with my club team. I always make sure to stretch before and after practices and competitions. Regular exercise is really important for people with AS and I think working out six days a week has helped me cope. I also spend time in the hot tub to keep my joints loose.

Spondylitis Plus: How big or small a role does AS play in your future plans?

I am planning on playing Division 1 lacrosse in college and studying business. AS plays an extremely small role in my plans. I aspire to compete at the highest level. AS had made me even more in tune with my body. I am diligent about taking care of myself, which actually helps me as an athlete.

Spondylitis Plus: What do you want others your age with AS—diagnosed or not-yet-diagnosed—to know?

I want to help other kids with arthritis understand that this disease doesn’t define them. AS is a new aspect of your life that you will have to deal with, but it doesn’t have to limit what you’re capable of. Finding the right treatment plan and communicating honestly with your doctor are important. Also, find people you trust to talk to and get help if you’re feeling down.