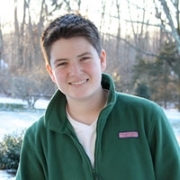 I was diagnosed with juvenile spondyloarthritis (JspA) in March of 2012. It was a relief to get a solid diagnosis on the problem I had. My health issues started when I had Lyme disease in third grade. It gave me arthritis in my knee, which took a year to heal. By fifth grade I still had fatigue and joint pain, but I moved on to playing sports. In sixth grade I ran cross country and played travel soccer. That was the only year I was able to do sports at 100%. It took a lot out of me, but I loved being on teams and I loved to run.

In seventh grade I started to have pain in my back, which was diagnosed as muscle spasms. The pain would quiet down and I could manage as long as I didn’t do anything. I went from running a 6:45 minute mile, on average, to barely getting through a school day. I had to use the elevator and couldn’t participate in gym. My back was always sore, and simple things like going up stairs or carrying my guitar would aggravate it. A few months after the back pain arrived, my knee got arthritis again. I had pain and stiffness in my joints but I didn’t understand why. I was still trying to do what I could, and my pain was always up and down.

My whole life was inconsistent and it was based on whether I felt good or not. To cope, I tried to take it easy, but I always ended up overdoing things when I did feel good. If my friends were going golfing, I would go and play the whole game, and then we’d play basketball or football for the rest of the day. Afterwards I would come home and collapse in my bed. I was thankful that I still had my friends and could do activities, but it took a toll on me and I came home worse than I left. The inconsistency was a problem at school. Most of the time I was on top of my work and I understood the concepts. However the 20% of the time when I wasn’t feeling well was just enough to bring my As down to Bs and give the teachers the idea that I wasn’t trying. They were reluctant to give me any help because they didn’t think I deserved it. I had decent grades so they didn’t think the health problems affected me.

Once in seventh grade when I was feeling better, I went snowboarding on a family trip. I was an experienced rider, but I fell and broke my humerus. My arm was in two pieces and it was difficult to immobilize and slow to heal. I was out of school and in so much pain with my arm that I didn’t think about how I still had pain in my back. Then my knee flared up and I knew it wasn’t an athletic injury because I was on the couch. My whole seventh grade year was full of injuries – the back pain, arthritis in my knee, and my broken arm.

That summer I was determined to get back in shape and reenter life. For so long everything my friends were doing – riding bikes or going on a trampoline – I couldn’t do. I went to summer camp and once again was going all out to climb the rock wall, enter rowing competitions and join every pick-up game there was. I was in a relay race at the end of camp and after that my back felt destroyed.

When I started eighth grade, my back hurt like the previous year but ten times worse. I was put into physical therapy to heal and strengthen the muscles. The physical therapist realized the problem was more than muscular and sent me for x-rays. My vertebra was fractured. The treatment was a huge back brace worn for 3-4 months. The brace became a literal cage and I felt it was containing me and separating me from everything. I isolated myself from my friends and my family. I spent hours just lying in my bed and feeling depressed. I always had muscle spasms thanks to the brace. I couldn’t sleep in the brace. Sometimes I had to stand in school because it hurt too much to sit. The pain, combined with the fact that none of the doctors understood it, put me in a state of uncertainty and abandoned me there.

I was always in and out of school, regularly late or dismissed. My knee swelled up and I fell twice. We found out later that one fall caused a second fracture in my spine. My diagnosis was a pars fracture, which isn’t usually extremely painful, so the doctor didn’t understand my intense and worsening pain. He kept saying to give it time, and we kept waiting for improvement that never came. They checked for HLA B27, the genetic marker for spondylitis, but I am negative for the gene so that delayed my diagnosis.

Finally we went to Hospital for Special Surgery in New York for a second opinion. We thought I had one pars fracture that wasn’t healed and I might need surgery. Instead, we found out that I had two fractures, which already healed, and my pain was caused by spondylitis. Since stretching and movement relieve pain, four months with a brace immobilizing my spine made the arthritis flare exponentially.

The back fractures and the brace were the lowest point in my life. The only good thing is it made doctors really look at my back and pay attention to my symptoms. When I had muscle spasms in my back, nobody looked further, but now I had x-rays, CT scans, MRIs, and finally one of the best doctors looking at me. Doctors in Connecticut always felt that my arthritis was leftover from Lyme disease and since I was already treated with antibiotics, there was nothing to be done. The doctors in New York were great and between the orthopedists, rheumatologist, and physical therapists, I am getting good care and still improving.

So now I am a freshman in high school with juvenile spondyloarthropathy. The uncertainty is gone and I’m trying to move on with my life. I still have regular pain in my back, knee, and hands, but it is far from the agony I had last year. I take voltaren every day and do my physical therapy stretches. If I try any vigorous physical activity, I feel broken for the rest of the week. Unlike last year when I was hardly in school, this year I’m constantly in school but it is sometimes hard to get through the day.

I’ve become an expert as masking it; hardly any people know anything is wrong with my health. It is good that they don’t judge me differently and I can stay on the same level with them. I can appear like nothing is wrong with me, but in reality things are wrong with me. There are always questions about why I have a top locker or why I don’t do sports. The dead giveaway is the rolling backpack. At this point I can give a vague answer and put the questions to rest.

A few important people know about my spondyloarthritis: my family, a few friends, my advisor and teachers. My family has helped me the most. My brother sometimes has to carry my guitar and my backpack into school and he just does it – he’s fine with it. My sister just got diagnosed with JSpA and I’ve been able to support her. She is much younger than me, and a competitive dancer, so her symptoms are not as bad.

This year was a new beginning for me. I’m in a new school and my attendance is great. The people there really care and they’re very understanding. I’ve healed physically and mentally from all the past injuries. I’m worried about my diagnosis because spondylitis can be hard to live with, but I’m optimistic about the future. I feel that if I try, I can deal with it. I don’t have the progress I want, but I’m working for it and have new treatments ahead. Hiding from spondylitis won’t work – you have to stand up and face it.